Galeria Millan presents, from October 7 to November 3, 2020, the virtual exhibition Quadriculado, by the artist Sandra Antunes Ramos. The show brings together some of the artist's most recent productions, made in 2020 during the period of social isolation. Since the beginning of her career, Ramos has been producing works that question the dialogue between forms obtained from the line in space. This time, the research is inverted: in Quadriculado, the intention is to perceive the variation of the space itself in this dialogue.

The unfolding of her research with the line announces, in this new production, a change of object: the focus now migrates to the space. With the field of vision enlarged, it is as if the artist had taken a step back, to understand a larger whole. With this, the perspective is altered and, with it, the very dimension of each work.

The amplification of space modifies not only the field of dialogue, but also the variation of the use of the same materials. If in her previous works on paper, this support remained almost neutral between one color and another, her recent works imbue it with an active capacity. Starting from the checkered plane, some already indicate the primary intervention of this support in the composition. That is to say, the white of the paper, which used to jump as an outline, now yields its task to the line in its two manifestations: the checkered and the weft - another line to dialogue.

Shared between the dense color of the painting, the line and the weft, space materializes through the control of the experiment. The practice of delimiting the painted forms in a well-defined place is associated with the squared space in an almost Cartesian way. However, this same control is counterbalanced by the running of the free weft, which cuts the elements in their formal organization into an autonomous walk. Sewn together, the images denote a system of writing that covers the space and with it we can read the communication of an ambiguity of the line, either as direction, or as part of the whole. 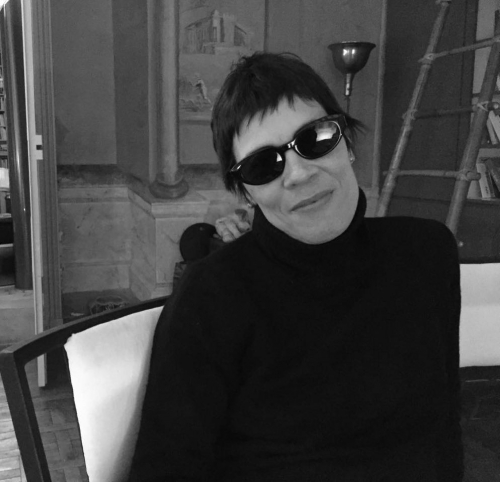 The work of Sandra Antunes Ramos is based on her trajectory through the graphic arts. The composition between colors and white and the sequence of forms in her paintings echo the desire for construction and organization of space. The artist does a kind of diagramming of these singular and unique formats, establishing an undefined spatiality in which the viewer is invited to enter. She also creates a situation of uncertainty where the interior and exterior of her paintings communicate and seem to switch places.