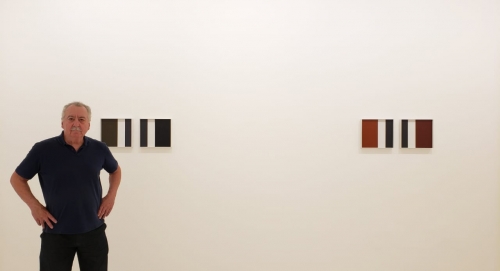 Cassio Michalany was born in 1949 in São Paulo. He started painting in the late 1960’s. He is an architect who graduated from the Faculdade de Arquitetura e Urbanismo (FAU-USP) in 1973. Cassio received the Prêmio Aquisição (acquisition award) at the 4th Jovem Arte Contemporânea Art at Museu de Arte Contemporânea, in 1970, and at the 7th Salão Paulista de Arte Contemporânea, in 1976, both in São Paulo. Throughout the 1980’s he participated in many relevant national exhibitions, such as: ‘Destaques da Arte Contemporânea Brasileira’, at the Museu de Arte Moderna, in São Paulo (1985), the 19th São Paulo Biennial (1987) and in the 17th and 20th editions of Panorama da Arte Atual Brasileira (1986 and 1989). In 1991 and 1994, respectively, he was part of the exhibitions ‘O Que Você Faz Agora Geração 60?”, at the Museu de Arte Contemporânea, and “Bienal Brasil Século XX”, at the Fundação Bienal de São Paulo.The broad praise to his work is highlighted by the publication of the books Cassio Michalany: Pinturas, published by Cosac Naify (2001) with words by Rodrigo Naves, and Como anda a cor: trabalhos recentes de Cassio Michalany, by Fundação Stickel with words by Tiago Mesquita (2005); and by two major solo shows: ‘Cassio Michalany’, at Instituto Tomie Ohtake (2003) and ‘Pintura sobre parede’, at Centro Universitário Maria Antonia (2004), both in São Paulo. In 2019 the Millan Gallery started representing the artist, and held his solo show Cor-Planar.