Do you know what silence is? It is very much ourselves, so much. With this apparently simple but at the same time profoundly philosophical question, Riobaldo Tatarana, going around and around, tries to understand if he makes, or not, a pact with the devil. And he completes the thought: Things like this we ourselves don’t catch or cover. They fit in the night’s glow. The sacred breeze. Absolute stars! (1)

Something from this atmosphere is present in the paintings of Ana Calzavara. Delicate canvases, where scenes from the side of the road appear in strange profiles, many times gazing up, as in looks captured during movement, through the car window. This causes the excess of sky, and the scenes in angles that don’t always fit the frame, nor are situated in the right direction, as if they’re sliding, escaping control. What is it that’s being portrayed here? Empty spaces? Desolate landscapes? The feeling of a path? Sleep, or the dreams of someone (of a child?) that sleeps in the car, in the back seat? A state of vigil?

The twilight ambiance, so present in these paintings, indicates both the tonal predominance of the compositions and the staining that covers the definition of things, making them mysterious. But if in the paintings of Armando Reverón, for instance, a similar staining occurs due to the painter’s excessive gazing at the inclement sun, here it seems to elapse, on the other hand, from the night light, moon light, therefore more metaphysical. Produced during a very agonizing moment in Brazil and in the world, these canvases by Ana Calzavara seek quietness, non-assertiveness, a suspension of judgement. They aim at something distant, perhaps hidden in the horizon. A breath o fair in face of the oppressive urgency of the present.

When describing an epiphanic night in Bologna in 1941, Pasolini, still a young literature student, sees in the small fire groves (2), made up of a firefly swarm, in a moonless night, the symbol of love and friendship, opposing the oppressive vigilance of the war, which was then, at its peak.

Fireflies still alive and visible, even under fascism, with their intermittent glow, hesitant and pungent, like art. Something similar to the twilight of these paintings by Ana, with their shortsighted and blurred glow, in skies at either dawn or dusk, in a country where the floor gives in. Maybe what’s left for us is really to look up, or far away. In these paintings, the gaze looks for escape, and misses. The quick stroke, on the other hand, shows a lack of patience. How much time will we still have? Art doesn’t answer. But it asks. 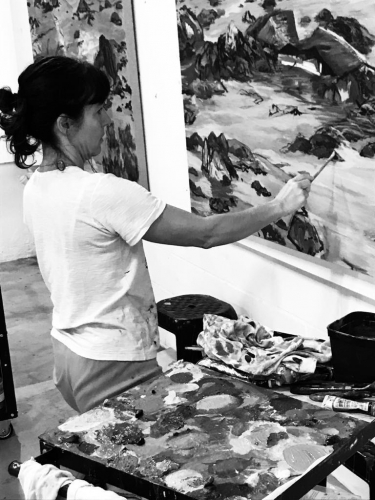